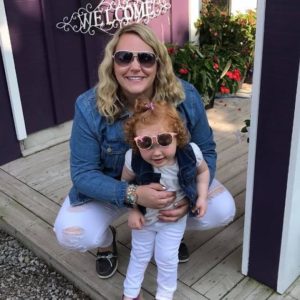 When I began working on this series, one thing I really wanted to convey was that mental health issues do not discriminate. Mental health disorders do not care what gender, ethnicity or religion you are, or even what job you have.

Today’s story perfectly demonstrates the power and prevalence of mental health disorders and how we do not have the ability to always see it for ourselves, even when we work within the mental health field. This should make us realize more than ever, that it is the responsibility of our communities to look out for, support and protect one another.

Jodie, is married and a mother to a 3-year-old daughter, and she is a mental health professional herself. She has been in the counselling and treatment field for around 14 years and has worked with people experiencing, grief, eating disorders, sexual abuse, trauma and more. Despite her extensive knowledge in the field of mental health, when she experienced a traumatic and life altering event, she began to show signs and symptoms of Post Traumatic Stress Disorder (PTSD) that impacted her life greatly.

A self-confessed “empath” or “highly sensitive person,” Jodie speaks about her love for her chosen profession and her passion for helping others is evident in the way she speaks. She also acknowledges that being a counsellor has its own challenges.

“It can be a very tough job, especially with burnout, compassion fatigue and vicarious trauma,” said Jodie. “This is ok in your younger years when you haven’t necessarily experienced a lot of your own trauma, but it can really affect or impact the compassion you can give to other people when you start to have some of these experiences for yourself.”

Jodie and her husband experienced a parent’s worst nightmare just after their daughter’s first birthday. This chain of events would change their lives forever and Jodie even admits that she still feels the after effects of the event 2 years later.

“Our daughter had just turned one and she got sick and spiked a fever very quickly.  She had a febrile seizure and went unconscious,” explains Jodie.

“She was foaming at the mouth in my husband’s arms, right in front of me, she shook, her eyes rolled back and she went limp and unconscious.”

As a result of her losing consciousness, she started to turn blue.

Jodie dialed 911 while her husband immediately started performing CPR on their daughter.

In the mental health profession, a lot of discussion takes place over each individual’s fight or flight response when faced with a traumatic event. Jodie says she experienced the flight response.

“I could not bear seeing that picture that I could not undo in my head. I actually ran outside and started yelling for help and for someone to come and save my dead baby.”

She explains how she sat on the front lawn, in tears, on the phone with 911 dispatch. At that point a neighbour ran over and went into the house to help her husband. “I stayed on the phone,” she says. “I felt an extreme amount of guilt for that response.”

“It was not a choice, it was just what my response was in that situation, I have taught for many years about fight or flight, you would think I would give myself a break.”

Her husband continued to do CPR on their daughter and removed her clothing to bring down her temperature. The neighbour grabbed cool towels to help.

As she sat on the front lawn, she says a few moments later she heard her daughter crying.

“It was the best sound I have ever heard in my life.”

As her mind and heart continued to race with the events that were unfolding, she describes herself as having an out of body experience and goes on to say that she couldn’t fully comprehend the amount of pain she was in.

“For a moment in time, I thought my child was dead.”

When the paramedics arrived, she remembers continuously asking them if her daughter was going to be ok and she describes the 10-minute ride to the hospital as feeling like hours. The whole trip, she was worried that her daughter would have another seizure and the fear of losing her baby stayed with her long after the initial event.

Jodie says her biggest fear moving forward was, “what if it happens again and I’m the one there, and I can’t respond like my husband?” She explains that she was also worried about other people who may care for her child and not know how to act if another seizure were to happen.

Two days after her daughter’s seizure, Jodie returned to work, something that she admits she would do differently looking back as she understands that early intervention after traumatic events provides the best outcome. Her decision to return to work, was partly made due to the fact that she has a great support system there and she felt that telling her story may help her heal from the experience.

“I kept telling the story and seeing people’s reactions was horrible. Some would cry, others would be in shock and not know what to say, but I was almost telling the narrative as an outsider, so I would say it, but I wasn’t really emotionally tied to it,” explains Jodie, “This made me realize that no matter how many times I talked about the situation, it wasn’t helping me heal.”

During this time, her anxiety skyrocketed and she began to worry more and more about her daughter sleeping and would go into her room during the night.  She describes how her daughter even making certain noises would produce a physiological response within her. “Looking back, I should have taken medication or seen someone,” she says. “You keep thinking that you will be fine and that it is normal.”

She explains that the feeling she was left with was, “go on, suck it up, walk it off, your baby is fine now.”

The pattern of checking her daughter throughout the night continued, and she would regularly monitor her temperature, breathing and blanket placement during the night. At this time her daughter seemed to have a hard time falling asleep at night and Jodie says she seemed extremely stimulated before bed certain nights. It was discovered that she was having Petit Mal Absence Seizures and their daughter underwent neurological testing to find out what was going on.

Certain Doctors she spoke to during this time explained that their daughter would have a difficult time regulating her temperature and that fevers would likely come on very quickly, leaving Jodie concerned. “Lot’s of my friends had kids who had fevers when they were sick, you didn’t necessarily worry that this would happen,” she said, “Every time she is sick with a fever, I worry that she is going to have another seizure.”

Jodie and her husband are thankful for the support the hospitals and medical staff have shown their family but she explains, “this is our reality now.” Their reality also includes an increased risk that their daughter will develop epilepsy, something Jodie and her husband will remain vigilant about.

When talking about the signs and symptoms of PTSD, Jodie said the symptoms affect much more than people realize, “the symptoms add up and take a toll on your body, that is a period of time I can’t get back.” She said the biggest things she noticed was, parental anxiety and sleep issues that affected her mood and energy. She describes PTSD as something that looks different in everyone.

Some common symptoms are;
*Anger
*Sleep Disturbances
*Anxiety
*Worry
*Flashbacks
*Routines/checks you do to make you feel better
*Sadness
*Burnout
*Being triggered

Jodie talks about her own triggers surrounding the event and recalls how doing a CPR class at her workplace left her feeling numb and unable to finish her CPR test.

“Until I went through grief in my own life, I functioned quite well therapeutically,” she explains, “After, I found it hard to work on some of the topics that I had done for so many years. I did it, but at the expense of my own self.”

This realization led to her making a move from front line mental health response and into a prevention and education role, enabling her to use her skills through teaching and coaching.

When asked about defining moments on this journey, she credits “authentic and genuine care” from her friends (some of whom are therapists) being one of the key factors in helping her move through this traumatic experience. She wants people to know that, “it is ok not to be ok.”

Jodie believes that people feel a lot of shame when it comes to talking about their symptoms and the common belief is that life goes on. She acknowledges that it is uncomfortable talking through these things and feels like those thinking patterns lead us to believe that we have to move on with our life, therefore avoiding the symptoms we are living with.

What makes PTSD particularly complex is that symptoms can often show up a long time after the event, making it harder for the person suffering to link the incident and the symptoms together as they feel the event is historic. She explains how she experienced this, “I would cry a lot at work, but I was crying about the wrong things, I wasn’t zoned in on what was really the problem.”

She has some advice for those who may be going through this themselves, “Write down your symptoms, keep a daily track, check in with yourself every day and ask yourself, what is my body telling me?”

When talking about the future of mental health, Jodie is a firm believer in education. “Mental Health literacy is needed for the future, in schools and workplaces,” she goes on to speak about the role family and friends can play, and says that the best thing they can do for a friend or loved one, is let them know that their response to their trauma is normal and expected. She also suggests providing some options for mental health support so that they know where to go when they are ready.

Click on any of the images below to receive one of our reports: 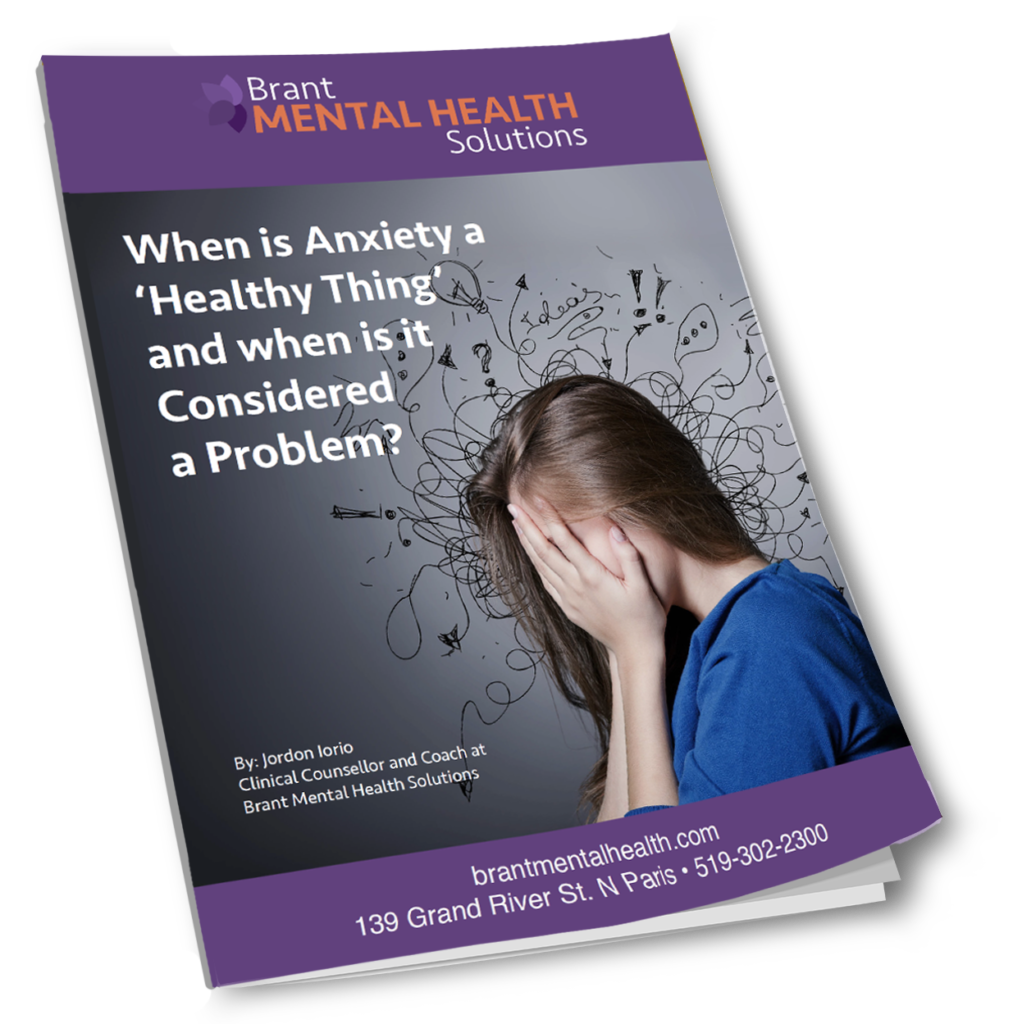 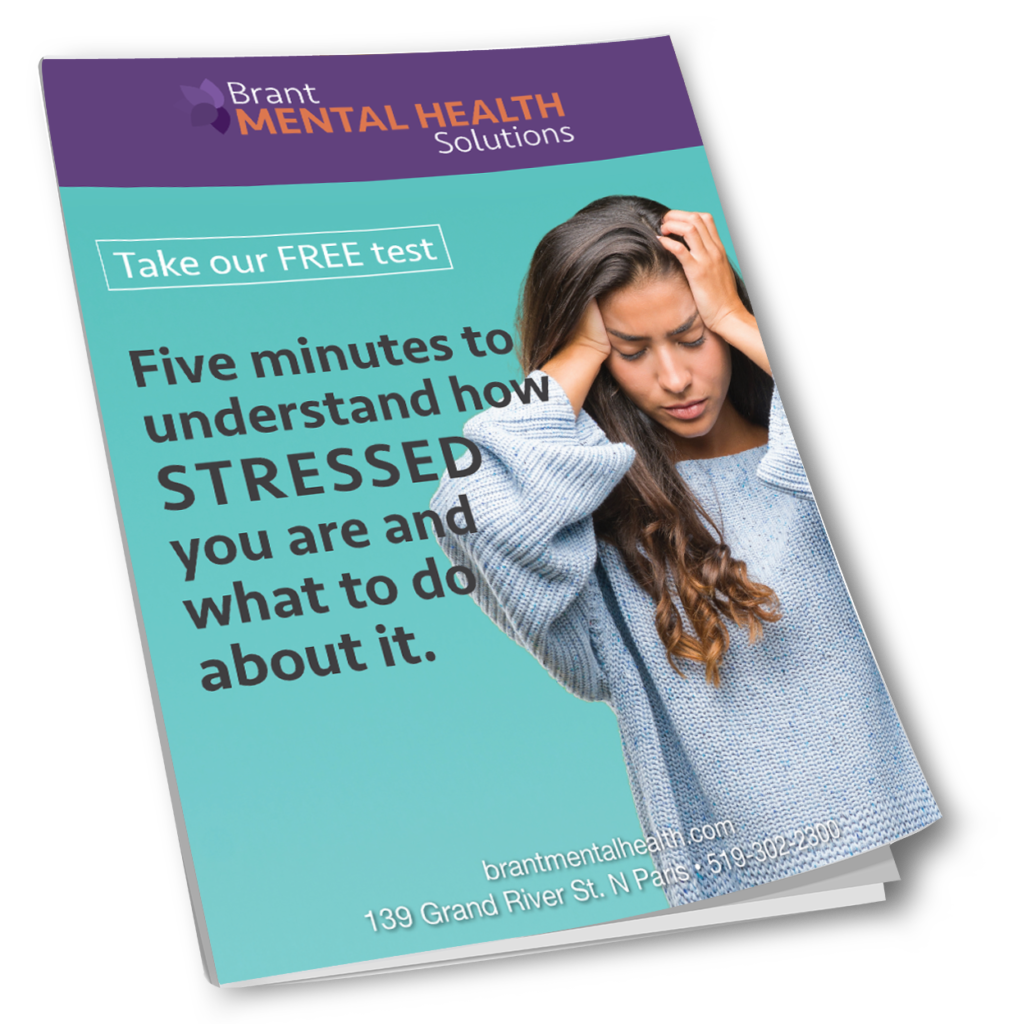 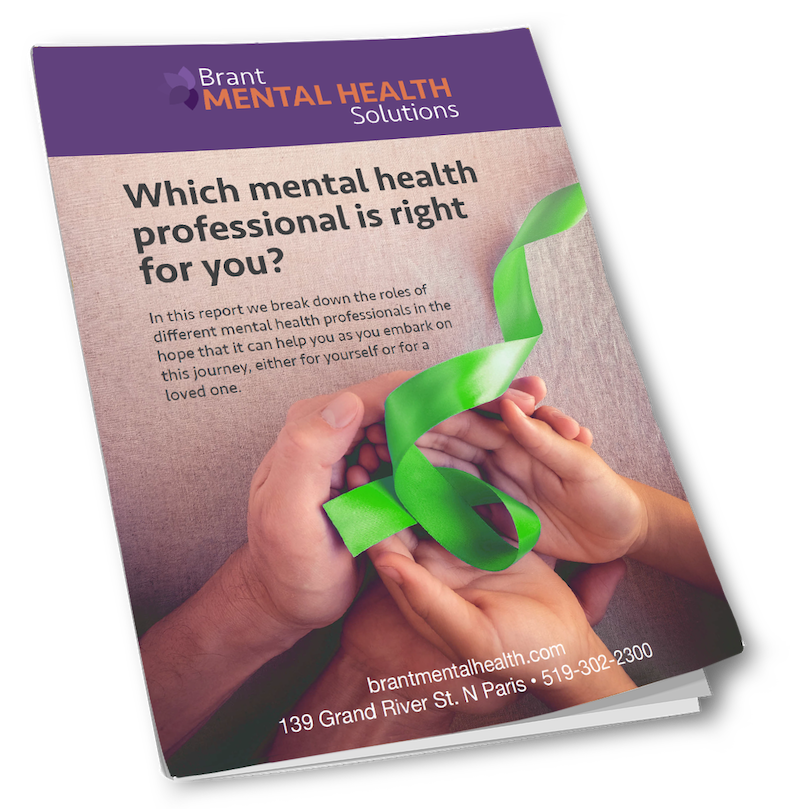 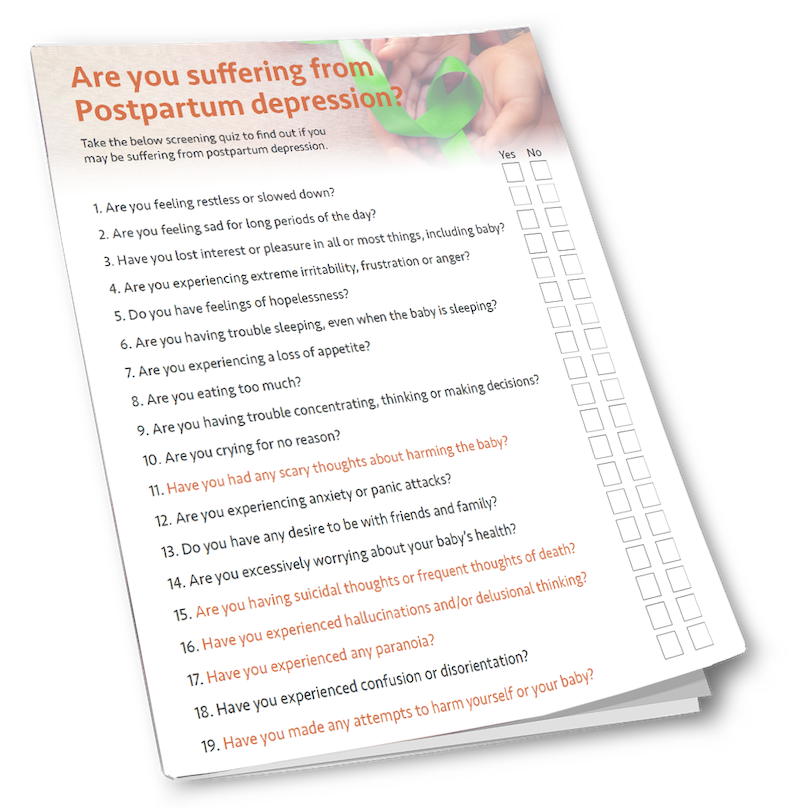 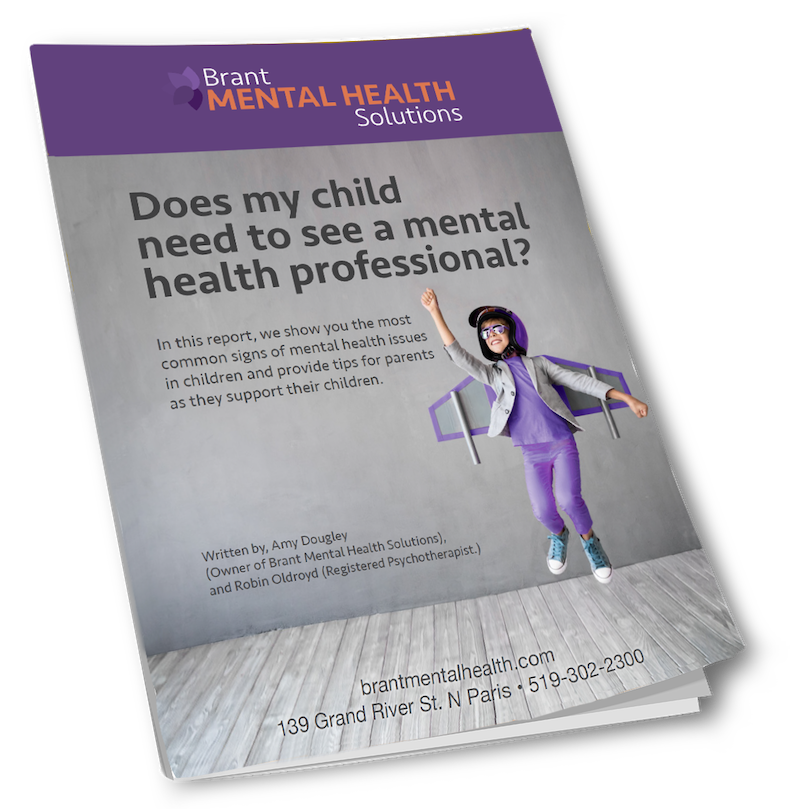